to view the Legion menu.

If you aren’t a member of a Legion, you can come here to join an existing Legion or create a new one. Once you become a Legion member, you can view your Legion information here.

, and then view the Legion ranking to see where your Legion lines up in the world-wide Legion list.

Deputy Commander: There can be five Deputy Commanders per legion. They have the power to admit and remove members, send Legion invites, and send group mail. The Legion research Talent Scouting increases the number of Deputy Commander you may have.

Once a certain amount of unique IP players have joined the legion, the Commander can collect Legion Codes to give out to his legionnaires. Once you have a Legion Code, copy the number from your mail, go to Emporium, on the bottom left click Exchange Code, paste the code into the box and click View then Exchange.

The amount of Legion Credits need for each Research increases by level. Early on the most upgraded Research is Accounting, which gives a 1% bonus per level to each player's tax revenue. 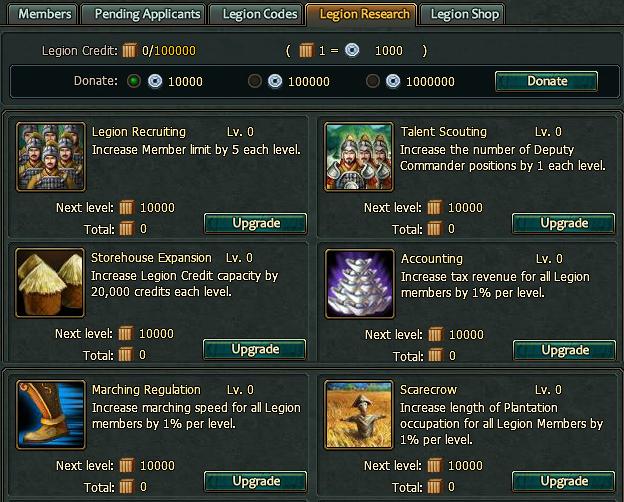 Each time a player fights in an actual battle against NPCs or other Kingdoms, he or she will receive Army Supplies. These can be used in the Legion Shop. Players can donate them to the Legion Shop, which adds more items to be bought, or use them on the items already there. *need confirmation, never actually had enough to buy something*

Retrieved from "https://clash-of-kingdoms.fandom.com/wiki/Legion?oldid=4947"
Community content is available under CC-BY-SA unless otherwise noted.